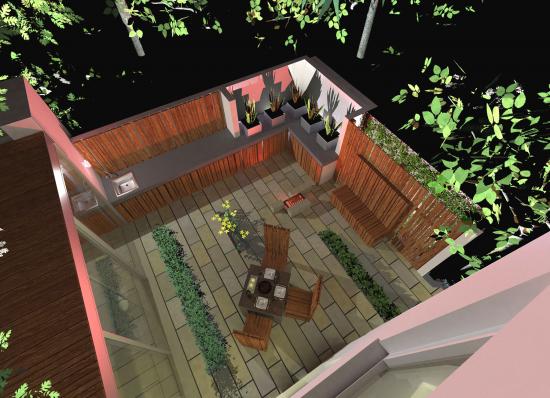 This property was designed and lived in by an early Modernist Architect who had immigrated to the UK in the 1930s. It had a very interesting history and design that clearly embodied his personality, experiences and beliefs. Surrounding trees had structurally undermined the property and it was in a precarious condition. It also needed updating to bring it up to modern technical standards. We were invited to oversee repairs to the building by relatives of the original owner, and asked to extend it in a sensitive way that respected the original design. We were also asked to integrate the rear yard into the scheme to make it an extension of the kitchen and living areas – an external room in a sense.

Using the same type of stone as the existing paving to the yard we carried the materiality f this throughout the ground floor using level thresholds. External timber cladding intended to soften the appearance of the garden wall was also carried through into the kitchen. The effect was to make the garden flow indoors becoming the fitted furniture of the kitchen. Green planting on the roof of the extension reinforced the illusion that the garden and interior spaces were as one. Garden furniture such as tables and chairs were made in the same timber as the cladding and formed sculptural objects within the garden when not in use. An external hearth completed the illusion of an outdoor extension to the home.